However, after a UCLA study reported that pet food manufacturing was responsible for up to 25% of environmental damage through farming, eco industry leaders would argue insect-based pet food is far more a need than a trend.

What is insect-based pet food?

Much as the name would suggest, instead of chicken with rice, your dog will be chowing down on crickets with rice. Black Soldier Fly larvae (BSFL) and Mealworms, known as Grubs, are also commonly used for insect-based pet food. But aside from the protein source, the food remains exactly the same as any other commercial dog kibble.

Despite its relatively new presence, manufacturers have been keen to ensure plenty of options, with toppers, wet food, supplements, treats and chews all available on the market. One brand offers a Black Soldier Fly Larva Oil, containing high amounts of Lauric Acid, the same MCFT that made Coconut Oil a favorite among pet owners.

This vast range of options further strengthens its position as an option for allergy sufferers, with lack of treats and protein contamination being key reasons that allergy diets fail. 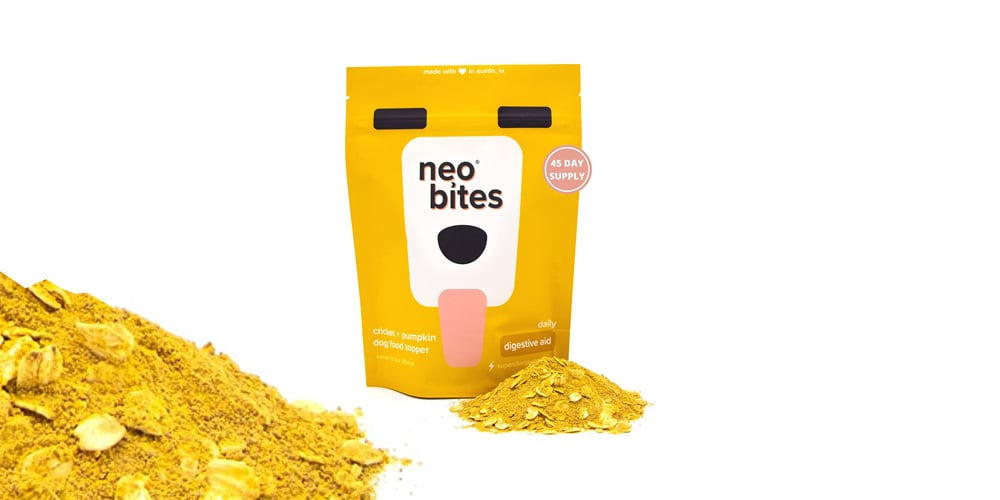 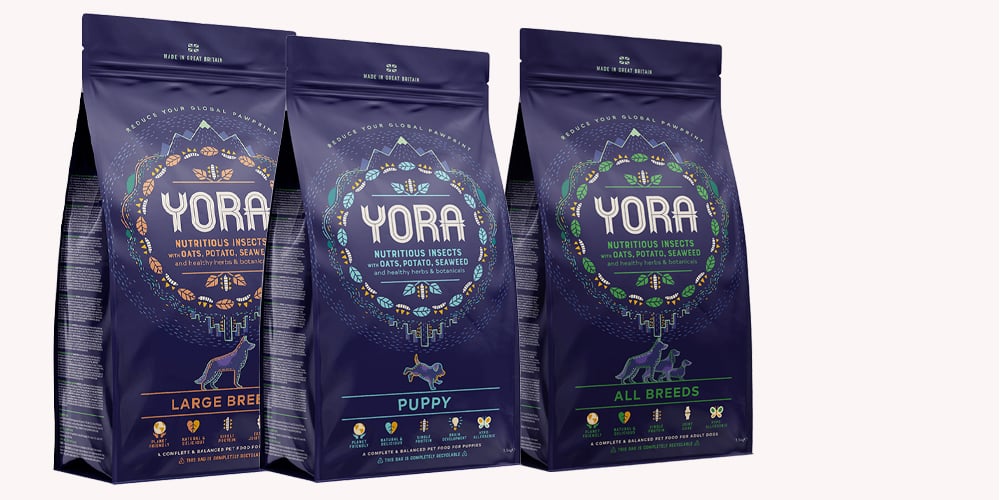 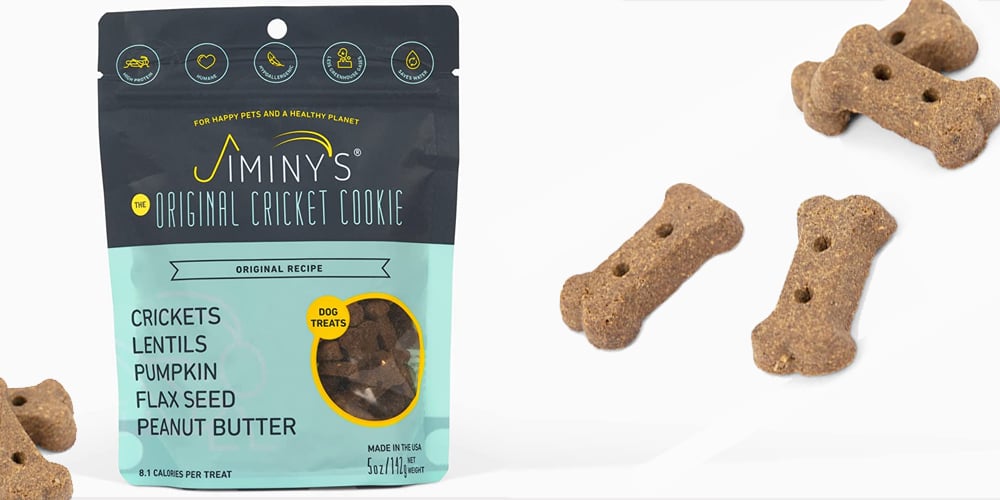 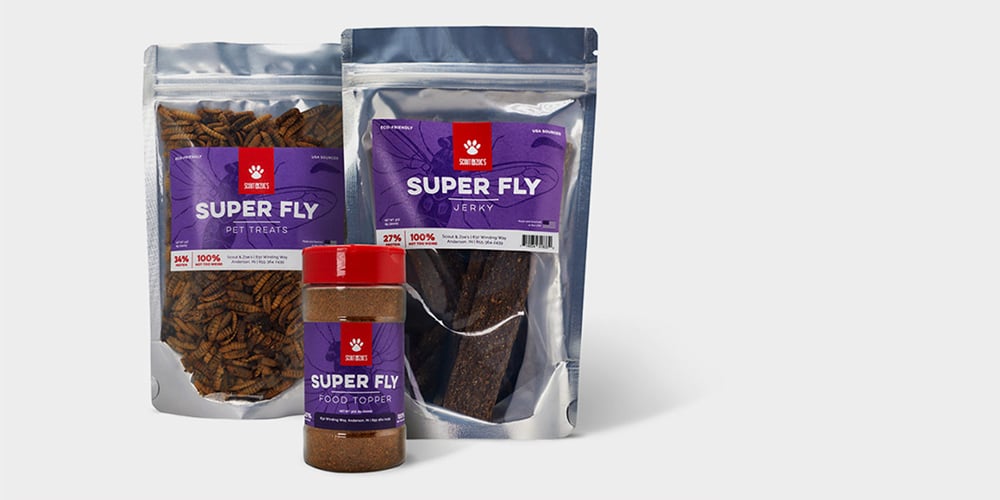 If you're finding yourself uncomfortable, it might surprise you to find that your dog is already eating insects. The primary diet of the chicken and fish in your dog's food is insects. By skipping the middleman and feeding your dog insects instead directly, it's possible to reduce manufacturing times, create more ethical farming and significantly reduce environmental impacts.

Using insects as protein sources has shown to be promising, with research demonstrating impressive digestibility, proving highly beneficial for pets with sensitive stomachs. Other factors include a dry matter protein ranging from 40-60% and a high amino acid profile score, on par with poultry and fish meal.

Current studies have only assessed the comparison of insect meal to other protein meals, leaving research lacking in how feeding bugs to our dogs stacks up against raw meat diets.

For most raw feeders, commercial food isn't viewed as an attractive option. But with encouragement for humans to reduce their meat consumption, could replacing raw diets for just 2 days a week be a palatable compromise to lessen the impact of your pet's carbon footprint?

Allergies and intolerances are one of the most common ailments seen in vet practices worldwide, with treatment pathways including medication, hypoallergenic and novel protein diets.

With pet owners increasingly opting against medication, effective novel protein diets are in high demand. These diets consist of something the pet has never consumed before. Unsurprisingly, insect-based dog food fits firmly into this category, presenting an excellent option for vets to recommend to itchy clients due to the wide variety of products already available. Could this solution to a widespread issue expedite the uptake of feeding bugs to our dogs?

Sure, they might be as healthy as other meat sources, but why would we choose to feed them to our dogs? It all boils down to the environmental impacts. Per kilogram of protein, beef produces more than 12x the amount of greenhouse gasses when compared to insects. Though greenhouse gasses are not the only form of carbon footprint when it comes to food production, with soil depletion and water pollution causing increasing concern for eco-giants.

By 2030, it is estimated that up to 3 billion people will be experiencing food and water shortages; smart solutions will be crucial to prevent famine and drought. Protix, the world's biggest insect farm, estimates that compared with beef, insect-based foods use just 2% of the land and 4% of the water per kg of protein. Enabling 1 tonne of insects to be grown in just 14 days on 20sqm of space, the size of a large bedroom!

This space is an ideal environment for insects: cozy, humid and full of surplus human food products, ultimately fostering a waste-free process, conserving other meats for our consumption. The process is truly regenerative once the insects have been harvested. The soil becomes fertile and can be used as manure containing 1000x less ammonia than manure from farm animals, reducing soil and water pollution.

Unlike typical farming, insects don't require fertilizers or pesticides. This further emphasizes the benefits to the environment and eliminates more concerns from consumers. And for many vegetarians, feeding insects is more tolerable than chickens, pigs and cows. The insects are raised under strict animal welfare standards, with no transport required for slaughter, which consists of chilling into a hibernation state before mincing at high speed.

AAFCO is yet to recognise individual insects as ingredients, meaning labeling currently consists of only “Insect” or “Insect Meal”. Considering "meat meal" is seen as an undesirable pet food ingredient, there will be strong calls to recognize individual insect ingredients to prevent food manufacturers from including less digestible insects in the way of quality ingredients.

The future of insect-based pet foods

With the UN claiming that insects form part of the diet for over a quarter of the world's population, what's stopping us from including our pets? Certainly market research points in that direction, with 47% of pet owners feeling positive about feeding insects to their pets, but that still leaves 53% uncomfortable.

Economists are also positive, with Dutch multinational Rabobank projecting a 50-fold increase in the insect-based pet food market by 2030 and the industry as a whole estimated to reach 1.3 billion by 2025 from just 144 million in 2019. From an investment point of view, it would be impossible not to feel that the early bird catches the worm in this case.

Seemingly, the only downside to insect-based pet food is a western revulsion to feeding insects. We can't question the overwhelming benefits, but is this a cultural barrier we can move past for the sake of the planet? With pasta, seafood and other international delicacies historically viewed in a similar vein, will insects join the list of previously shunned foods? The decision may come sooner than we all think.

5 Ways to Improve Your Dogs Heel

Adding Veggies to a Raw Diet

Are Corrections Required in Dog Training

Can I Train My Own Dog in Bitework?

Choosing a Ball on String For Your Dog

How to Choose a Dog Leash

The Dog Owners Guide to Thanksgiving

Getting started in Schutzhund

You Just Found a Dog in a Hot Car

How Long Should I Train My Dog Per Day?

How to Host Dog Training Classes on Zoom

How to Start Walking Your Dog

How to Stop Your Dog from Shedding

How to Teach Your Dog to Heel

How to Teach Your Dog to Sit

How to Teach Your Dog to Stay

Is it OK to Use a Retractable Dog Leash?

Moving to Japan With Your Dog